BLLAs – We are in the running again! 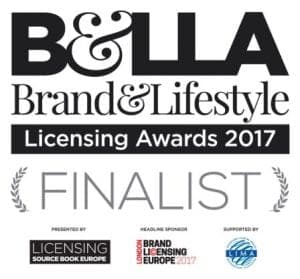 It was only when I took a step back after Nancy and I had finished building our stand at BLE last year I realized that we had an ‘AGENCY STRATEGY’.

Purely because of the way the cards had fallen in the last 12 months we’d found ourselves as a Licensing Agency focused entirely on food brands.  There they were and I couldn’t deny it –Kellogg’s, Pringles and SLUSH PUPPiE – three great and very different brands.

It also became apparent that other people had spotted our well thought out strategy too as we were approached by a couple of other food based brands who through they’d fit well into our portfolio!

It also makes me look at the BLLAss in a slightly different light too. For many years ‘Upstairs’ BLE brands felt a bit lost in the Licensing Awards that are, and continue to be dominated by the entertainment industry. Don’t get me wrong, it’s a great event to be part of, but with the BLLA’s we feel like we have something that’s ours, and somewhere we feel like we belong.

It’s the main reason we felt like we should offer Pringles as a sponsor, however, even better is that we have 2 brand nominations for Jane Asher (not exactly a food brand but close enough for me to think we are still ‘on strategy’) and Kellogg Vintage, as well as a product nomination for the Portmeirion Kellogg range.

Will we win? Well I wouldn’t have entered if I didn’t think we had a chance, but in the meantime its great to be nominated and we’re looking forward to the event and the ‘after’ event very much!